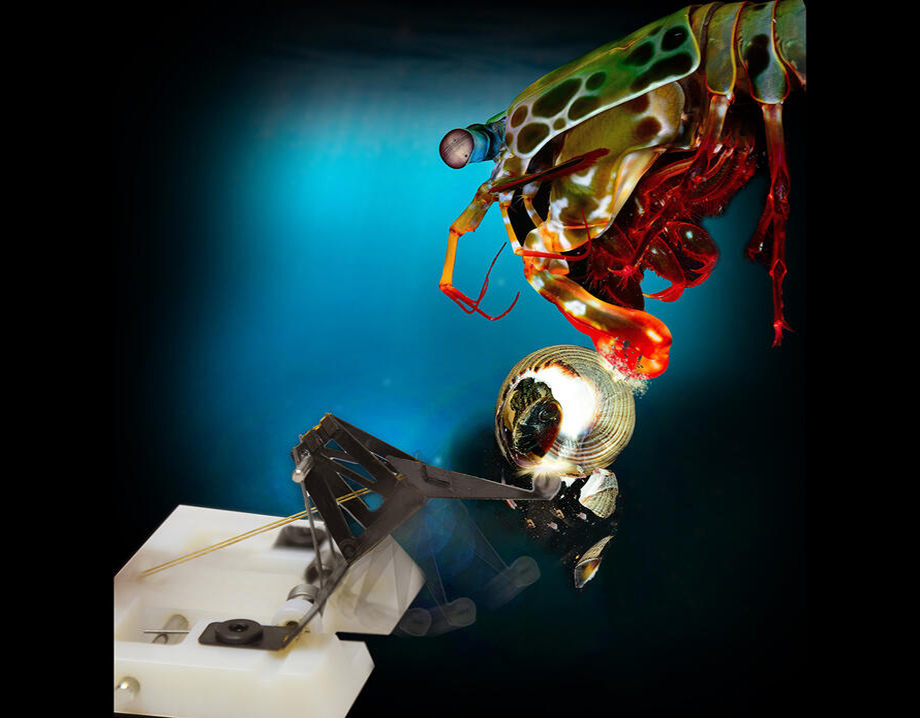 An interdisciplinary team of scientists modeled the mechanics of the mantis shrimp’s punch and built a robot that mimics the movement. Credit: Second Bay Studios and Roy Caldwell/Harvard SEAS

Who is the world’s mightiest pugilist? It’s neither the kangaroo nor the hairless primate. In fact, it’s a featherweight that’s champion of them all: the mantis shrimp. The inches-long crustacean can take a limb off a crab and crack the glass of an aquarium. Now researchers from Harvard, and Duke, have joined forces to create a tiny robot that packs a devastating wallop as powerful as that of the mantis shrimp—almost.

The purpose of the research is not to create a machine that will help us get to the meat faster at a lobster dinner but to help us understand the mantis shrimp in the first place because biologists have not fully understood the mechanism behind the shrimp’s power.

Recommended for You: A Squidbot Hits the Seas

“If you don’t understand it, what you do is you make something based off your understanding,” said Emma Steinhardt, a graduate student at Harvard’s John A. Paulson School of Engineering and Applied Sciences and lead author of the paper. “A physical model of mantis shrimp for exploring the dynamics of ultrafast systems,” published in Proceedings of the National Academy of Sciences this August. “Then, if it works, maybe it shows you how the biology works because you can’t go to the mantis shrimp and say, ‘How do you do this?’”

The chief question that has remained unanswered of the mantis shrimp aficionadi is exactly how the stomatopods release their hammer-like claws for a punch. Unlike their boxing brethren in the human world, the shrimp don’t bring their appendages back right before throwing a jab. Instead, they coil up their limbs and then lock them into place with bumps in their tendons called sclerites. “Then they can go off and do other mantis shrimp things,” Steinhardt said.

But something strange happens when the shrimp gets ready to pummel predator or prey. First, it unlatches its “raptorial appendages,” as the striking ends of its limbs are called, and then there’s a pause.

You May Also Like: Georgia Tech's SlothBot is Engineered to be Slow

“You would think that if the sclerite was the thing that was holding back all of this energy stored in its spring, that when the sclerite moves out of the way, the whole thing would strike. But it doesn’t,” Steinhardt said. Instead, there’s a significant delay before the shrimp’s little fisti-claws fly into action. 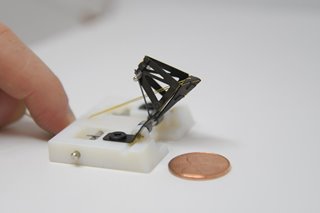 The raptorial appendage of this mantis shrimp machine throws a dangerously fast punch—and it tells us how the sea-dwelling animal performs its pugilism.
The reason for the delay had eluded even the world’s acknowledged mantis shrimp expert, Sheila Patek, a professor of biology at Duke, also an author on the paper. And the machine’s designers consulted with her for every iteration. Eventually, the mechanical model of the shrimp’s arm answered the question of the delayed thwack. Like a mantis shrimp limb, their machine is a four-bar linkage mechanism that turns spring stored energy into sudden action. The business end of the arm rises slowly until it suddenly snaps into motion. “There is a point of no return,” Steinhardt said. “Once you hit over-centering, the rest of the motion has to happen.”

“At some particular draft of the paper, she had this moment,” Steinhardt said of Patek. “‘This is exactly how it works,’ she said. ‘I think this is right. I think you guys have figured it out.’ ”

To get there, though, Steinhardt, her co-author, Harvard postdoc Patrick Hyun, and primary investigator Rob Wood, a professor of engineering and applied sciences at Harvard, went through a lot of mechanical shrimp. The forces were so great that each machine threw only a handful of punches before it broke. The initial material they were using for the hinges, Kapton, was tearing quickly. The lab replaced that with Kevlar, but the Kevlar would unravel after just a few swings. Eventually, they settled on Kevlar impregnated with Kapton, developed by Yongjin Kim at the University of Massachusetts Amherst. “A lot of shrimp died in the making of that paper,” Steinhardt said, speaking of the machines.

Though the purpose of the research, funded by the U.S. Army Research Office, was primarily an attempt to understand the mantis shrimp and try to duplicate its techniques, there are several potential applications. For one, the forces generated by the machine could be used to make a high hopping robot. Frogs, for instance, use some of the same explosive principles as the mantis shrimp, and the world continues to suffer from a sad dearth of robotic frogs. A robotic shrimp could also have some value in the operating room. “Maybe if you want to cut something very fast—maybe it causes less scar tissue—that could be a use,” Steinhardt said.

But before the mechanical bottom-dweller starts replacing surgical scalpels, there’s plenty of room for improvement. At the moment, it’s not as fast as the flesh and blood version. But there’s no reason to think that Steinhardt and her team won’t soon close the gap. “The next idea is to do some design optimization and make things go faster,” she said of the chance of closing in on the crustacean’s speeds. It’s been quick work, given the shrimp’s head-start. “Mantis shrimp have had thousands of years of evolution.”