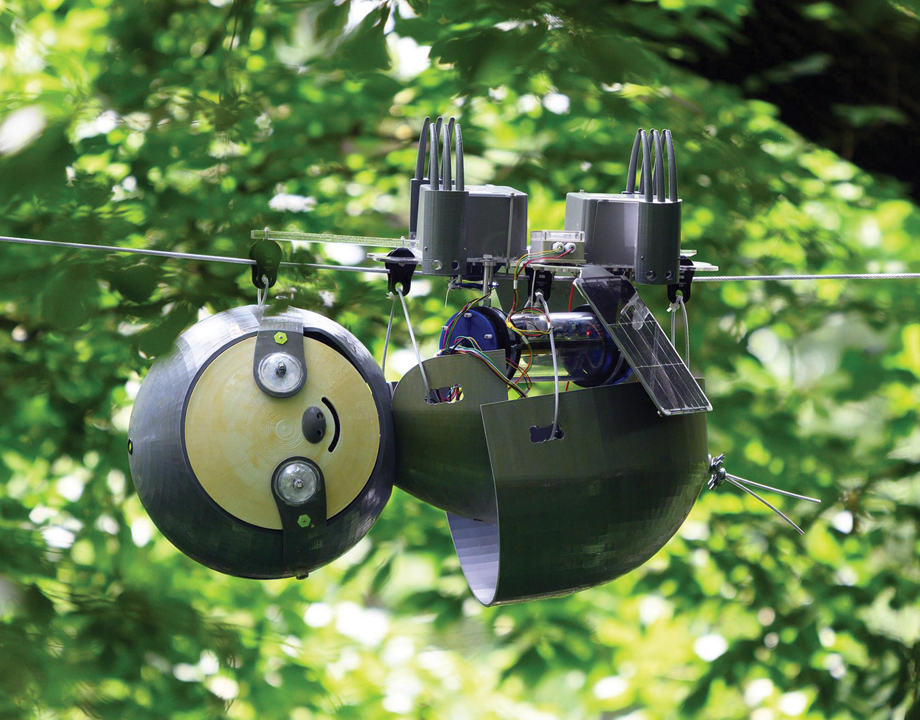 The SlothBot is slow by design. Thanks to its natural lethargy, it can monitor the heights of a forest for years without human intervention. Photo: Rob Felt, Georgia Tech

Georgia Tech's SlothBot is Engineered to be Slow

As a roboticist, Magnus Egerstedt usually spends his time tinkering with machines that are zippy, agile, and acrobatic—namely quadcopters, sometimes swarms of them. But when the Georgia Tech professor of electrical and computer engineering was vacationing in Costa Rica with his family, he became obsessed with a creature that had none of these qualities: the sloth.

The famously slow folivore puzzled him. “It seems like a poor strategy for an animal to just be sitting there waiting to get eaten,” said Egerstedt.

There are answers to questions like these. For instance, a sloth’s slowness conserves energy and it allows algae to grow over its coat, camouflaging it from would be predators. “I got really fascinated,” said Egerstedt. “Why not build really really really slow robots. Because there are applications where speed doesn’t matter.”


The first challenge he faced in making the SlothBot was finding a way to get funding for it. “When I approached federal funding agencies and said, ‘I’m going to build really slow robots, are you in?’ it took a while to explain why it’s worthwhile,” said Egerstedt. Eventually he zeroed in on an appropriate application for a sluggish automaton: persistent environmental monitoring. 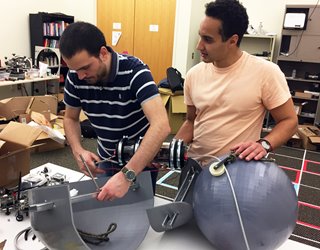 Georgia Tech graduate research assistants Yousef Emam and Gennaro Notomista assemble SlothBot in the laboratory of Magnus Egerstedt. Photo: John Toon, Georgia Tech
What goes on in rain forest canopies and other remote locales is gleaned from brief field surveys by researchers who then build models based on their limited data. But a robot that would move only when strictly necessary—primarily to charge itself by sunbathing—could monitor air quality, temperature, humidity, insect and animal activity, and pollen over the period of a year or more.

Recommended for You: One Indestructible Bug In a Soft Robotic Body

The obvious need for such a device secured funding from the National Science Foundation and the Office of Naval Research. The next the big problem that Egerstedt and his colleagues faced was just where their slow bot would perform its limited moving.

They started on the ground. “But it’s a messy place, with branches, rocks, and sticky mud—lots of things that can make a robot get stuck and then it’s game over,” said Egerstedt. Climbing seemed an option but turned out to be too complicated, and a fall would end the robot’s monitoring abilities. He considered turning to his quadcopters, but even with charging stations rigged in the trees the energy cost would be too great. Dirigibles seemed like an airborne alternative, but their maneuverability isn’t sufficient. 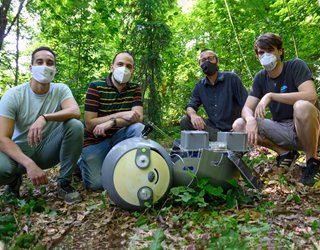 Georgia Tech researchers prepare to install the SlothBot at the Atlanta Botanical Garden. Photo: Rob Felt, Georgia Tech
The answer came when he was speaking to Jonathan Pauli, a professor of forest and wildlife ecology at the University of Wisconsin, and a sloth expert. Pauli had seen sloths on the move at a cacao plantation where the harvested beans were transported in carts attached to wires. “Sloths use these wires as superhighways,” said Egerstedt. “You see sloths climbing over roads on telephone wires. Once he told me that, it was like ‘Of course—we need to make the SlothBot wire-traversing.'”


Soon Egerstedt and his team had created a solar-powered wire-hanging robot that was essentially a collection of electronics in a weatherproof tube. “Like a transparent sausage,” said Egerstedt. One of the researchers noticed that the robot’s two LEDs looked like eyes and the tube a rudimentary body. So, to make the SlothBot more slothy, she 3D printed a sloth skin and soon the robot’s cuteness factor had grown by several orders of magnitude. “I was surprised by how much it mattered and how much more suggestive it became, and how much kids started caring about it,” he added.

The robot is now hanging out in the Atlanta Botanical Garden, moving into the sun only when it needs to. A hawk seemed irritated by it and then ignored it. It’s unobtrusive enough that squirrels sit on it.

Now Egerstedt is hoping to shrink the robot and to further ruggedize the tree-dweller. Then he hopes to send a group of SlothBots into the trees of Costa Rica and to those inspiring wires. “We’re going to take them to the cacao plantation and have them interact with sloths—see what happens.”