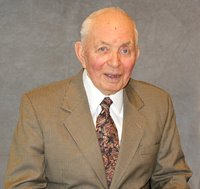 Throughout his 61-year engineering career John has been an inventor and problem solver. He has over 400 invention disclosures and 33 patents. Early inventions were primarily for defense industry programs like the F-16, AWACS, and B-1B.

In 1981, John founded VME (Volunteers for Medical Engineering) solving problems faced by persons living with disabilities. VME grew and merged with Learning Independence Through Computers (LINC), which was involved with similar efforts, to become V-LINC. He and his coworkers created new antenna developments by day and assistive devices in the evenings and weekends. Through his example and the promotion of VME, he encouraged thousands of engineers, college and high school students and friends to create solutions that improve the quality of life for individuals living with a disability.

John takes great pleasure in watching someone use their hand for the first time (using VME’s Servo-driven Orthosis), or in hearing someone in an iron lung exclaim “oh boy!” with the blink of his eye (using VME’s blink Writer System), or looking a person straight in the eye as they abandon their wheelchair to cruise around in VME’s Mobile Standing Frame. The Future Home, in Jarrettsville, Maryland created in part by VME volunteers was state-of-the-art 30 years ago. It is still operational today. It features wheelchair presence-sensing elements at the front entrance’s automatic doors, surveillance cameras, and drop-down kitchen shelving, which is now considered standard to “Universal Design.” John remains active with V-LINC and his local community. He knows that creative possibilities are endless and he continues to work on the special solutions made possible by the volunteer-supported initiatives at V-LINC: bike clinics, summer camp, high school projects, community college and engineering projects, all of which improve the quality of life for persons living with disabilities.

John is presently living at the Carroll Lutheran Village (CLV) retirement community where he is designing a “Lever Drive Bicycle” giving persons living with disabilities the ability to ride a bicycle, and an “Opposing Door Opener” that allows someone in a mobility vehicle to enter a home with doors wide open for unimpeded access. He chairs regular meetings of local volunteers to inspire creation of solutions to obstacles faced by their fellow seniors at CLV and for disabled children with V-LINC volunteers.

He earned his BSME from Johns Hopkins University in 1961 and his MSME from the University of Maryland in 1965. John is a licensed professional engineer.

If you ask John when he plans to retire, he will say, “When they close the casket. Actually, I’m donating my body to science, so not even then.”