Opened in 2011, the museum houses important collections of engines and mechanisms. 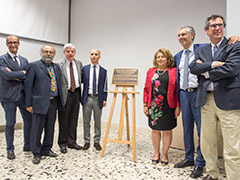 ASME Past President Madiha El-Mehelmy Kotb (3rd from right), at the presentation of the commemorative plaque to the University of Palermo’s Museum of Engines and Mechanisms. Museum founder Dr. Giuseppe Genchi is pictured 4th from left.

With over 300 specimens, the Museum of Engines and Mechanisms of the University of Palermo collectively narrates the evolution of engine technology. This collection of engines, from water-powered devices, through the era of steam and reciprocating engines, to jet turbines, includes engines that once served to power pumps, factories, automobiles, airplanes, and ships.

Consisting of both stationary and transportation power units, with an emphasis on automotive and aircraft engines, the collection features both reciprocating and turbine designs, many of which are now rare, and several which are significant from both a historical and technical point of view. Among the more notable items in the collection are the Neville stationary steam engine and the Ljungström counter-rotating steam turbine, the FIAT 8V and FIAT-Ferrari Dino automobile engines, and the Siemens-Halske Sh.IIIa counter-rotary aircraft engine and the General Electric J47 turbojet engine.

The University of Palermo collection is unique, focusing on engines, rather than their casings. Fully restored in many cases, these engines are among the last surviving examples of their kind.

The collection illustrates the evolution of science and technology in the field of machines for over more than a century.

May 31, 2017
Plaque Presented by ASME Past President Madiha El-Mehelmy Kotb