Powered by two Rolls-Royce MK 202 Spey Turbofan engines which produced over 44,000 lbs (196kN) of thrust, the Thrust SSC Supersonic car is recognized as the world land speed record holder. In achieving an average speed of over 760 mph in 1997 at Black Rock Dry Lake, Nevada, it became the first land vehicle to officially break the sound barrier. 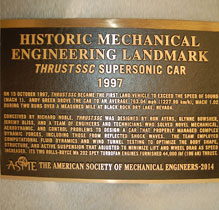 The Thrust SSC was conceived by entrepreneur Richard Noble and designed by Ron Ayers, former chief aerodynamicist at British Aerospace and a team of engineers. The strategic mounting and positioning of the engines, placement of the tires, management of safety and control of lift force were just some of the team's mechanical and aerodynamic solutions to problems that would have prevented Royal Air Force pilot Andy Green from achieving his record-setting run.

Open to the Public.
For more info visit Museum website at www.transport-museum.com