Key technology that allowed drilling through medium and hard rock, tapped vast oil reservoirs much deeper below the surface than previously possible, and significantly improved the efficiency and cost of drilling 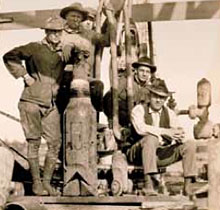 Drillingcrew with an early example of the Two-Cone Drill Bit.
Prior to 1909 the traditional fishtail bit scraped the rock and quickly dulled in service. The Hughes two-cone bit's revolutionary rolling action crushed hard-rock formations with twin cone-shaped, hardened steel bits, each with 166 cutting edges, revolving on bronze bearings shaped to provide a large surface with reduced friction.

Keith Thayer (right in photo) presenting the plaque to Derek Mathieson.
Unlike the fishtail bit, the Hughes two-cone bit rolled in a true circle, crushing and grinding the rock. This rolling motion allowed the cutting edges to chip the rock, one edge after another. Significantly, the cutting edges were designed so they would avoid falling into previous cuts, preventing what is known as tracking. This enabled each edge to continuously crush a new portion of the rock. The absence of pure scraping of the fishtail bit allowed the Hughes Two-Cone Drill Bit to drill faster and further before sharpening. The detachable cutters could be removed for sharpening or replacement when dull. Two-Cone Bit Accepting Plaque

The Landmark Designation Ceremony at the Hughes Christensen headquarters and manufacturing facility, The Woodlands, Texas.
The bottom of the drill hole, as formed by the operation of the bit, was a perfect seat for a water-tight joint, preventing leakage after the casing had been set. The Hughes Two-Cone Drill Bit ushered in a new era of abundant, inexpensive fuel and laid the foundation for the automobile age. 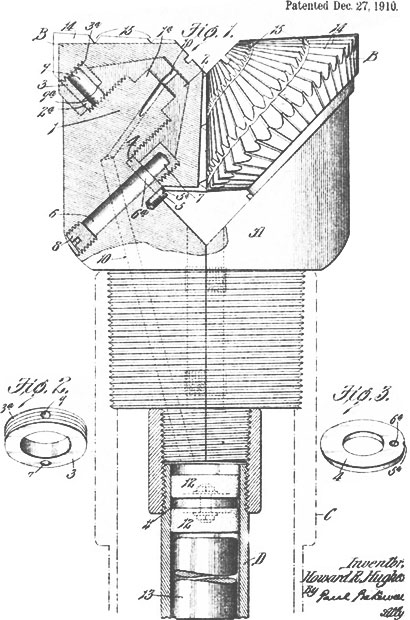