The Ljungstrom air preheater is a regenerative heat exchanger, invented in the 1920s and soon used throughout the world. Dr. Fredrik Ljungstrom, then technical director at Aktiebolaget Ljunstrom Angturbin, invented it for preheating combustion air in boiler plants, but the use has expanded to include energy recovery in combination with the removal of oxides of sulfur and nitrogen.

Throughout the history of boilers, many advancements have obtained better performance and lower fuel consumption, but few have been as remarkable or have been adopted so pervasively as the Ljungstrom air preheater. The first installation saved as much as 25 percent of the fuel consumption. In a modern utility boiler, it provides up to 20 percent of the total heat transfer in the boiler process, while only representing 2 percent of the investment. An estimate of total worldwide fuel savings is equivalent to 4,960 million tons of oil. In the United States, it annually saves about $30 billion US dollars.

The earliest installations have been taken out of service because the boiler plants were torn down. Thus the landmark is an early working model used in experiments from 1961 to 1977 at Svenska Rotor Maskiner AB, now featured in an exhibit at the Tekniska Museet.

Several inventions led to development of the air preheater, beginning in 1908 when brothers Birger and Fredrik Ljungstrom founded ALA to produce double rotating steam turbines. The first tests of the air preheater were performed in ALA's facilities in Gashaga, Sweden. The prototype was later installed at the factory boiler there. The first commercial installation was made in 1922 for AB Forenade Choklad Fabrikerna (a chocolate manufacturer) on the island of Kungsholmen in Stockholm. 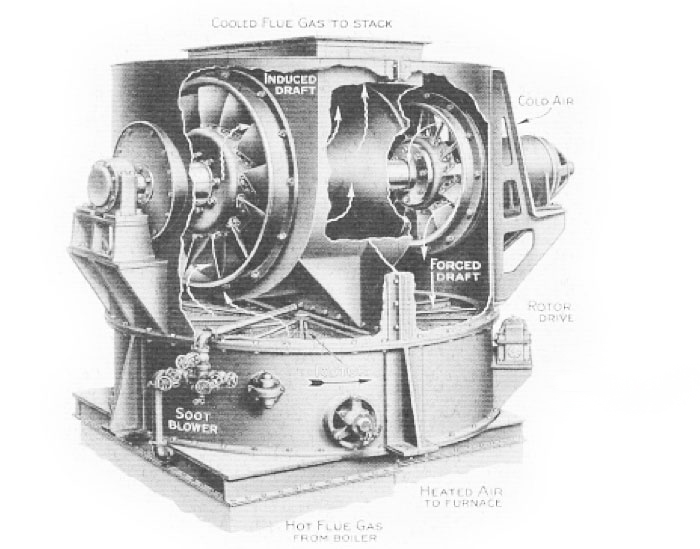