The Milam Building was the first high-rise air-conditioned office building in the United States. Many others followed suit. The air-conditioning design team was led by Willis H. Carrier, founder of the Carrier Engineering Corporation, in cooperation with architect George Willis, engineer M.L Diver, and contractor L.T. Wright and Company. The system provided 300 tons of refrigeration capacity with chilled water, piped to air-handling fans serving all floors. The original unit was updated in 1945 and further modernized in 1989.

When it opened in January 1928, this 21-story building was also the tallest brick and concrete-reinforced structure in the United States. Stores, auditoriums, and theaters had been air conditioned earlier, but high rises differ in that the air conditioning is part of the original design, in order to allow for ducting as well as air handling and control equipment.

In 1929, the maximum indoor summer temperature was 80 F with a relative humidity not exceeding 55 percent; in winter, 70 F or above with a relative humidity of 45 percent. Carrier studied local weather bureau records and the sensitivity of San Antonians to determine comfortable atmospheric conditions. Further factors adding to the complexity of the design included heat-generating exposure, such as the problem of radiant heat from the sun as it traveled from one side of the building in the morning to the other in the evening. Good air distribution, the re-use of return air, air-leakage concerns, and individual control were other design considerations. 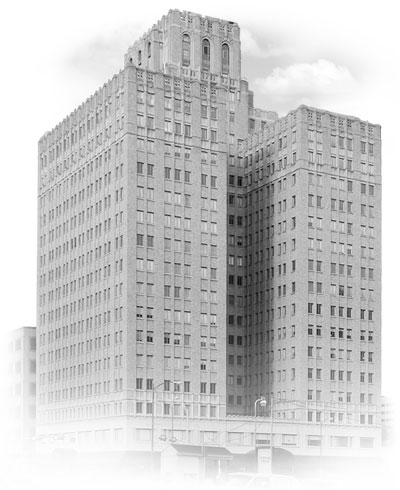 First survey in 1993, by Russell L. Shrader: Main elements of system updated, original blower units, one for each floor, original, except new bearings.