This floating dredge is one of the last mammoth gold dredges in the Fairbanks Mining District that traveled an ancient stream bed, thawing the ground ahead of it and scooping up the gravel. During 32 years of operation, a fortune in gold washed through its sluices.

Ladder dredges came to Alaska in the early 1920s, after the U.S. Smelting, Refining, and Mining Company (USSR&M) brought water to the area via the 90-mile Davidson Ditch. Using the water to warm the ground, the ground was thawed at an average 9 inches a day. The gravel was scooped up in buckets, carried up the ladder, and deposited at the top of the dredge for sorting. The gold was trapped on the riffles of the gold tables.

The dredge had a reputed 95 percent efficiency. It was operated by the Fairbanks Exploration Company (part of USSR&M) from early 1928 until operations ended in 1959. During that time it cut a 4.5-mile track from which miners produced more than 7.5 million ounces of gold. Today it remains a typical example of the machines that mechanized Alaskan placer mining, providing more than a third of the production for the state. 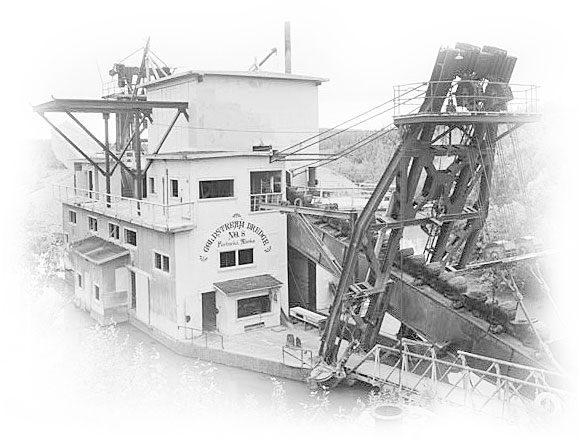 Fred Duthweiler visited site in summer of 1990 and reports the site looked good.