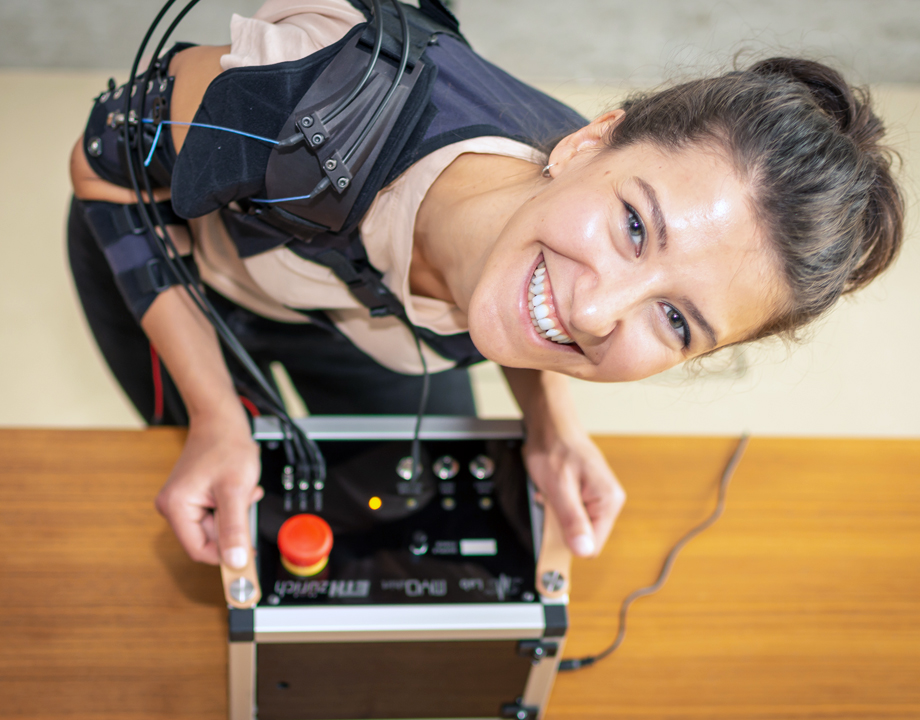 Robotic device is designed to be an external layer of muscles. Photo: ETH Zurich

Robotic “exoskeleton” technology has greatly advanced in recent years, restoring mobility and functionality to those who’ve lost it. But these technologies are expensive and typically only used in rehabilitation settings, so they are not practical for everyday use. Alternatively, a group of researchers at ETH Zurich are developing “wearable muscles” inside of a vest-like garment, called the Myoshirt, to fill this gap in the industry.

“The key change was to design these robots so that they don't behave as an external skeleton with a structure around the human body, but more of a low profile design where the robot is thought of as an external layer of muscles,” said Michele Xiloyannis, who is part of the postdoctoral team at ETH’s Sensory-Motor Systems Lab.

The team’s vision for the Myoshirt is for it to be low maintenance, quiet, and sleek enough to be worn underneath clothing, making it an ideal solution for those with restricted mobility who might want to be more discreet. 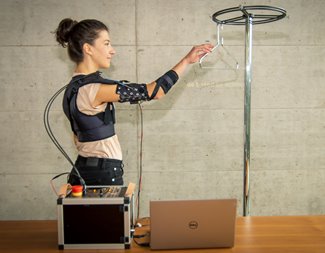 Myoshirt is based on human anatomy, using a closed-loop system with a single actuator and control unit. Photo: ETH Zurich
The Myoshirt was designed based on human anatomy. By assisting the shoulder, the overall functionality of the arm is improved. In the case of stroke patients, for example, by removing the force of gravity on the shoulder, the hand has improved strength and range of motion. Considering this, the team created a closed loop system powered by a single actuator and control unit.

Two anchor points at the shoulder and upper arm are linked together with artificial “tendons” that are crafted out of Dyneema fiber, the same material used for climbing and parachuting. The tendons are guided through Bowden cables, which connect to the actuator in an external box. When the user lifts their lower arm they activate the system, which then applies indirect force to assist them in completing their movement.

The team recognized the importance of a system that could work with the user in predictable ways. The user wouldn’t want an arm to go up when they’re trying to lower it, so force sensors in the tendon measure speed, velocity, and orientation to detect what movements the user is trying to accomplish, and a gravity assistance model determines how much force to apply. The user can also adjust the force based off their preferences.

More for You: Cybatholon Tests the Power of Exoskeleton

“This means that the Myoshirt moves in synchrony with you,” Xiloyannis said. “So you start the movement and the robot follows while removing a percentage of gravitational forces. This is something that we chose specifically because people with neurological and neuromuscular disabilities have problems elevating their arm against gravity. So gravity is the main obstacle for them, and this device makes them feel weightless so they can do daily activities.”

The team had a number of challenges to work through in developing Myoshirt, particularly with creating a system that could adapt to the specifications of the user. Depending on the fit of the device and the user’s own anatomy, the device behaved differently. Xiloyannis said they researched this for years, using modeling and identification techniques to find these nonlinearities in the system. They ultimately found that by closing an inner control loop on the velocity in the motor axis they were able to counteract the nonlinearities.

“What ultimately fascinates me about this technology is its overall simplicity,” Xiloyannis said.  “As engineers, we like to solve complex problems with complex solutions. We don’t always follow the simplest path. And this experience has taught me ‘the simpler the better.’”

The team is now tasked with streamlining the design. They’d like it to weigh less than five pounds. They also need to make it comfortable so it can be worn for hours, and they want to reduce power consumption and increase its efficiency.

The team will soon begin work with ETH spinoff company “MyoSwiss” to streamline the design and move it toward further clinical trials. The next step is to test it in everyday environments. For now they are celebrating the promising results of early trials.

In a controlled study, the team worked with twelve individuals, two of whom had mobility restrictions, and found that all were able to raise their arms or lift objects for much longer than without the Myoshirt. Endurance increased by an average of 36 percent and many of the participants reported the system to be intuitive and easy to use. Xiloyannis said the team was encouraged with the results their goal is to make this technology a part of everyday life for those with mobility restrictions.

“As engineers we forget that there are also social implications to the way we design these devices,” he said. “Ultimately, what these devices should do is make people more independent and increase their quality of life.”

Cassandra Martindell writes about science and technology from Columbus, Ohio.