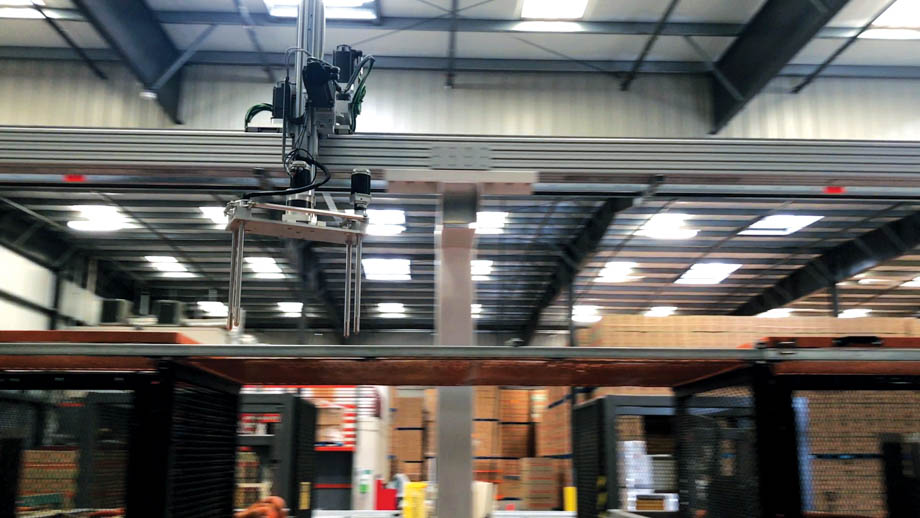 Cartesian robots with the right upgrades can take over manual operations with ease.

by Mike Everman Founder and CTO of Bell-Everman

Packaging operations continue to embrace automation as a way to reduce labor costs and workplace injuries while improving the efficiency and quality of packaged goods. But the use of automation isn’t evenly distributed, with large consumer packaged goods producers running with more automation than smaller packaging firms.

One area ripe for increased automation are operations that package or process produce. Often located near or captive to farms, these facilities still depend on some manual material handling operations to a large degree. The facilities can reap immediate benefits from a type of automation based on long-travel Cartesian robots with custom end-of-arm tooling (EOAT) and advanced sensing capabilities. These robots can tend to a variety of packaging machines—performing otherwise manual tasks such as feeding cartoning and tray forming machinery or separating nested cardboard containers for use on conveyor lines. Cartesian robots can also handle palletizing and de-palletizing operations.

These Cartesian robots, which are built around two or more coordinated linear positioning stages, may not be the first thing that comes to mind if you are new to automation. Instead, there’s a natural tendency to equate robots with the 6-axis, articulated-arm models that you increasingly see on factory floors. Even experienced automation engineers may give Cartesian robots short shrift, focusing their attention on the 6-axis models.

Yet in applications requiring the robot to tend a packaging machine, ignoring the benefits of a simple Cartesian system can be a costly mistake.


Articulated arm robots have carved out a prominent spot in many automated manufacturing and packaging facilities— and for a good reason. This style of a robot, when properly sized, can handle large payloads with ease. They also have the flexibility to perform many different types of automated tasks through programming and end-of-arm tooling changes. 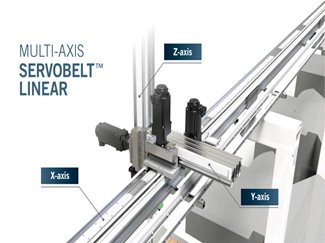 ServoBelt Linear actuators can support multi-axis configurations.
But the advantages of 6-axis robots come at a price. Not only are these advanced robots expensive, but they also have a potentially high “robot density” in the sense that you’ll likely need a unit for every one or two packaging machines. And while there are cases where a larger, expensive 6-axis robot has the reach to serve more than a couple of machines. These arrangements may require you to rearrange your machines around a very large robot.

Articulated arm robots also have high secondary costs in the form of the safety guarding and floor space requirements, as well as the expense of the skilled employees capable of programming and maintaining these robots.


The Case for Cartesian


For many packaging use cases, Cartesian robots have the edge over 6-axis models. One reason relates to the robot density. A single long-travel Cartesian transfer robot can tend multiple packaging machines—without any need to rearrange machines around the robot. 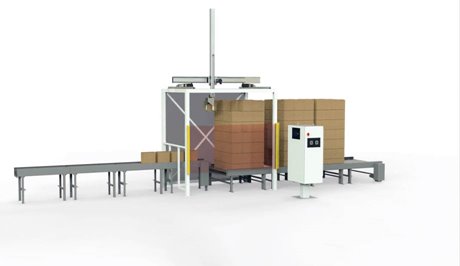 ServoBelt Linear actuators have made it possible to build large Cartesian packaging robots like the one pictured here.
By installing the transfer robots above the machines they tend, you also won’t incur a floor space penalty. Safety guarding requirements are minimal as well, at least compared to 6-axis models since an overhead installation naturally separates robots and workers. Finally, Cartesian robots have lower cost maintenance and programming requirements.

To reap these benefits, you’ll need the right type of robot for the job, and not all Cartesian robot systems are created equal. In fact, if you look up Cartesian robots online, you’ll find many smaller systems optimized for pick-and-place operations on production machinery or assembly operations. These are very different robots than the transfer robots useful in a packaging setting, which need to meet some more challenging technical requirements, including:


We recently delivered a set of long-travel transfer robots that showcase all of these technical features. Built for an agricultural packaging company in California’s Central Valley, the robots integrate seamlessly with the company’s existing IPAK tray formers. Each robot tends up to four machines at a time, filling the machines with stacked sheets of corrugated cardboard. 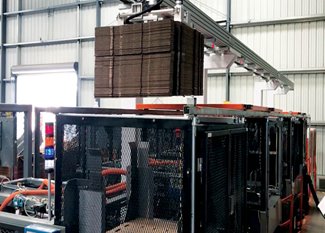 This turnkey agricultural packaging system integrates ServoBelt Heavy linear motion stages to deliver sheets of corrugated cardboard into tray-forming machines.
Installed above the machines, these 3-axis gantry robots are based on our ServoBeltTM Heavy linear motion stages. This stage design offers limitless travel lengths, independent moving carriages, and the ability to mount the stage in any orientation. For these robots, the longest axis of the three, which runs over the bank of tray formers, has a travel length of more than 50 feet.

To deliver sheets of corrugated cardboard into the four tray-forming machines, a robot first picks a load of cardboard from a custom-built dock that holds pallets of corrugated sheets. It then delivers the load of cardboard to each tray former. Thanks to ServoBelt’s speed, which tops out at 4 meters/second, the robots can easily keep up with four tray formers even at the full output of 35 trays per minute.

Recommended Video for You: The State of Robots for Maintenance

In addition to the robot itself, this turnkey system features overhead safety guarding and sensing provisions that prevent the robot from filling a machine whenever a human is present below. The safety system also enables selective use of the robot: Workers can manually tend one or more of the IPAK machines while the robot serves the remaining machines. This capability allows short runs of special trays without disrupting the normal high-volume runs.

The safety guarding, which is based on a simple arrangement of overhead sliding gates and sensors that lock out the robot from the machine below, cost just a fraction of what a floor-mounted 6-axis robot would require.

Also included in this system are all the controls and custom EOAT capable of working with stacks of corrugated sheets that vary unpredictably in height and weight. The tooling is cable of handling payloads up to 50 kg without complaint. 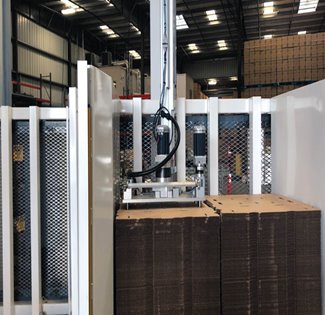 This system also includes all the controls and custom end-of-arm tooling capable of working with stacks of corrugated sheets that vary in height and weight.
The same cannot be said for the operators that used to load the machines. Picking up loads of cardboard from pallets and leaning over to insert them in the forming machines was back-breaking work that led to complaints of injuries—automating these tasks allowed workers to be reassigned to less physically demanding tasks.

This large transfer robot is just one example of what’s possible with Cartesian robot systems in a packaging environment. We’ve also developed palletizing and de-palletizing systems based on a very similar Cartesian approach. A de-palletizing robot is another good application for the Cartesian approach. It takes up less space than an equivalent 6-axis robot and allows selective manual operations if needed. This system also features laser sensors and custom EOAT that allow the robot to individually remove boxes from the pallet— even if the size and orientation of the boxes vary unpredictably.

What all these robots share is the idea that three linear motion stages—working together and with the right sensors, controls, and end-of-arm tooling—can be the most effective, efficient way to get started with the automation of packaging operations. No 6-axis robot required.

For more information on possible robotic solutions visit us at Bell-Everman.

Mike Everman is founder and CTO at Bell-Everman.