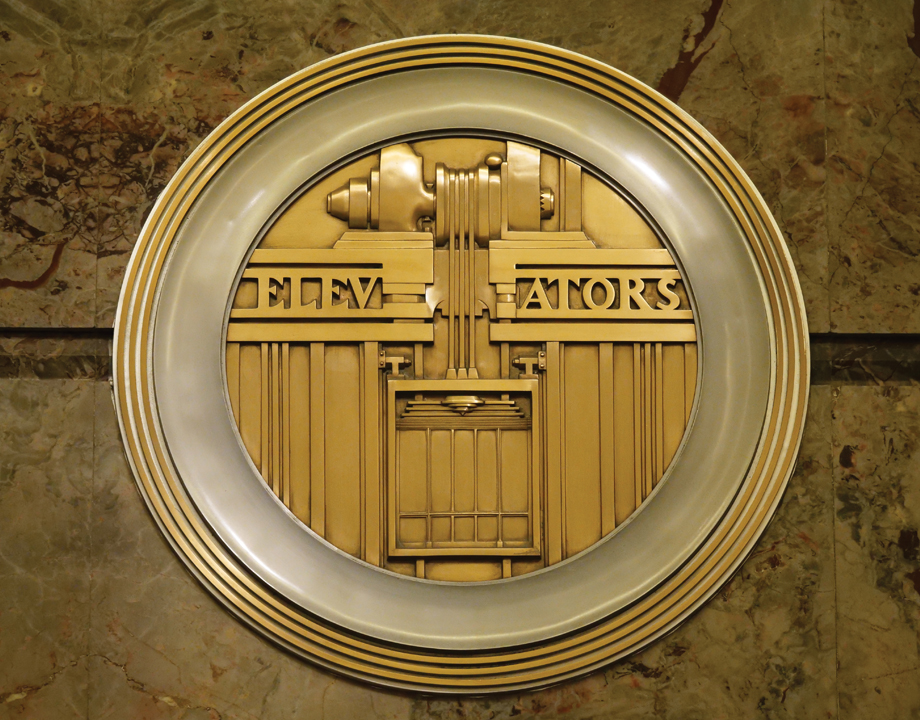 Unlike the monumental buildings of centuries past, the skyscraper has commercially valuable floors throughout, thanks to the accessibility afforded by elevators. Instead of counting steps as they trudged upstairs, tenants started considering views, and the top floors and penthouses became status symbols. ASME has played an integral part of the process of enabling buildings to reach the sky, beginning with the first publication of its A Code of Safety Standards for the Construction, Operation and Maintenance of Elevators, Dumbwaiters, and Escalators in 1921.

This role includes assisting in the development of the world’s most iconic skyscraper, the Empire State Building in New York City. In the late 1920s, architectural and engineering plans were well underway for the construction of the building, which was planned to be the tallest ever built. It was intended to have 85 floors, rising to a height of 1,252 feet above street level, and then continue another 200 feet higher with an additional observation and mooring tower. All this would be served by a cluster of 61 passenger elevators and six freight elevators, with load capacities ranging from 2,000 lbs. to 4,000 lbs.

This cage was part of an early Otis elevator. Photo: Getty.
There was only one problem. The building’s architects called for elevators to run at speeds as high as 1,200 feet per minute (fpm) to reach the upper floors in a reasonable amount of time. Such fast elevators could be built, but the New York City building code limited elevator speeds to just 700 fpm. Unless a way was found to allow the elevators to run at full speed, the top floors would be virtually unusable and the building would be a commercial failure.

More on Elevators: Elevating the Future

The ultimate solution, sprung from the collective ingenuity of the members of the ASME A17 Code Committee and other stakeholders, enabled the Empire State Building to open on time. That story is just one of the many that are part of the A17 Code’s 100 years of history.


High-rise, high-speed elevators started appearing in U.S. cities around 1900 in support of taller buildings. In the interest of safety, major metropolitan areas began developing local elevator regulations, with regulations first appearing in San Francisco, Boston, and New York City between 1911 and 1914. While national and regional manufacturers, the U. S. Bureau of Standards (USBS), and insurance carriers were involved in drafting these regulations, consistency or continuity in design and operational safeguards were absent and the local codes were based primarily on field experience, anecdotal events, and accident reports. 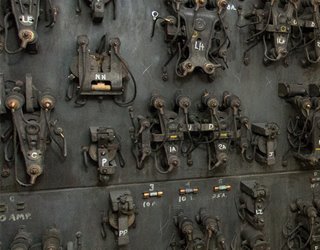 A board shows vintage elevator relay controllers from the Empire State Building. These devices were later replaced by computer controls. Photo: Otis Elevator
A national model code was sorely needed. In 1918, the ASME Committee on Protection of Industrial Workers organized efforts to draft an elevator safety standard, which culminated in the 1921 code. (This early code had no alpha-numeric identifier, but by the 2nd edition in 1925, it became known as the A17 Code.) At first, there were three co-secretariats: the American Institute of Architects (AIA), USBS, and ASME. Elevator technology was largely focused on design parameters for safety-related components such as oil buffers, car safeties, and hoistway door interlocks. Since these were the formative years for the A17 Committees, many fundamental studies and tests were undertaken between the A17 Research Committee and USBS. The work done was so rigorous that many design limits established then are still valid today.

Another set of contributors from the very beginning were New York City officials. With its growing forest of skyscrapers, the city was the largest elevator jurisdiction in the world. The New York City Code Committee and A17 Code Committee shared several members, which enabled constructive dialogue and the relaying of technical information concerning newly developed elevator technologies. The collegiality, professionalism, and openness between the A17 Committee and New York City Code officials was critical when the elevators for the Empire State Building were being discussed.

The earliest generations of passenger elevators were controlled by an onboard operator, who announced floors and directory information as well as put the car in motion. Elevator speeds were codified in the 1911 Building Code of New York City, with a limit of 700 fpm—around 8 miles per hour—based on the capability of human operators.

While that limit was acceptable for the first generation of Manhattan skyscrapers, it became unworkable in the late 1920s as buildings became ever taller. The ASME A17 Code Committee, together with the New York City code officials, began an educational campaign on the safety of high-speed elevators. These new-generation elevators used automated controls, not human reflexes, to ensure that the cars hit their marks at each floor. The campaign was a success, and the next revision to the New York City Building Law and Building Code would allow high-speed, automated elevators.

There was only one problem, and it was a big one: That revision could not be completed until late 1931 at the earliest, and construction of the Empire State Building was due to begin in early 1930 with a grand opening planned for May 1, 1931. The new building, the world’s tallest, would have to be compliant with the previous building code.

The solution—borne out of the collective ingenuity of the A17 Committee, the New York City Elevator Code Committee, the New York City Buildings Department, the New York City Elevator Code Department, Otis Elevator Company, the architect, and the main contractor—was ingenuous in its simplicity. Otis Elevator Company and the builders agreed with a plan to design, manufacture, and install all the elevators to meet the installation schedule. And, as installed, the cars would operate at speeds not exceeding 700 fpm, thus enabling them to be compliant with the prevailing New York City code. But the elevators Otis installed were capable of high-speed operation. Once the city code was revised, Otis could increase the speeds of 54 elevators by readjusting the elevator electrical controls, and have the city perform code inspections at the higher speeds. 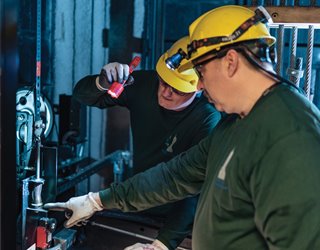 Two Otis employees inspect a roller guide on one of the elevator cars in the Empire State Building. Photo: Elevator Magazine
Considerable credit goes to the A17 Committee and the New York City Elevator Code Committee for their collaboration and determination to modernize the elevator motion control requirements in the New York City Code to be consistent with the A17–1937 Code. By way of a footnote to this legacy story, New York City continued to sponsor its Chief Elevator Inspectors as members of the A17 Sectional Committee (later Standards Committee) throughout its long history and adopted contemporary A17 Elevator Safety Code editions through its reference standard process, starting post-1938 and continuing up to this day.


World War II essentially froze elevator development—the 1937 Code was reprinted in 1945 with updates—but the post-war years saw advances in speed and safety. For instance, automated elevators were often subject to unsupervised passengers crowding into the cars, so the 1955 edition of the A17 Code included a design requirement that passenger elevators be capable of handling 25 percent overload, among other safety innovations. And the boom in high-rise construction in the 1960s led to the demand for higher design speeds, culminating in 1970 with three elevators in Chicago’s John Hancock Building that were rated at a then-record of 1,800 feet per minute. (The current record is held by Taipei 101, with an astonishing 3,300 feet per minute.)

The frontiers of elevator technology today include use in the challenging environment of wind turbine towers, computer-controlled destination dispatch systems, and remote intervention operation whereby operational parameters can be adjusted from remote locations.

Other changes have happened behind the scenes. In 1981, an A17 Standards Committee reorganization, in compliance with ANSI guidelines, resulted in the National Bureau of Standards and the American Institute of Architects relinquishing their roles as co-secretariats of the A17 Standards Committees. Programs to qualify inspectors were accredited by ASME, and the A17 Inspectors’ Committee developed checklists; as time progressed, cross references to A17.1 and A17.3 Safety Code for Existing Elevators and Escalators were added. (In 2013, ASME withdrew from accrediting elevator inspection programs; the QEI-1 Standard was revised to require accreditation by third parties.)

Another major effort brought together the Canadian elevator standard, which was metric-based, and the imperial-based ASME A17 into a common standard. While CSA B44 and ASME A17 enjoyed significant technical overlap, major differences needed to be addressed. In the late 1990s and early 2000s, volunteer technical committee members rolled up their sleeves and worked extensively to address areas of technical difference. The level of effort was demanding, driven by a mutual commitment to safety, and eventually all technical (and nontechnical) issues were resolved, and the bi-national standard was published in 2007. 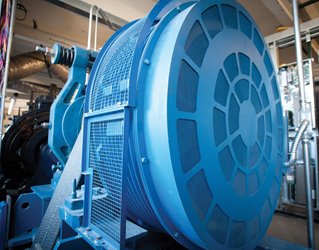 Renovations allowed new Empire State Building elevators to use lower-horsepower driving machines. Photo: Empire State Building
The speed at which the consensus process could address innovative new products also became a concern. New suspension technologies such as small-diameter steel wire rope, synthetic (aramid) rope, and elastomeric-coated steel belts forced companies to seek local variances to be installed in North America. In response, an A17 New Technology working committee was established to develop a performance-based safety code: New product design would be performance-based (as opposed to prescriptive), and at the same time be required to establish levels of safety equivalent to those in the A17.1 Standard. This standard (Performance-Based Safety Code for Elevators and Escalators ASME A17.7-2007/CSA B44.7-07) introduced mandatory use of a third-party accredited elevator and escalator certifying organization to validate design analysis and integrity. In addition, the Suspension Means Task Group (a subset of the A17 Mechanical Design Committee) developed a separate standard for suspension and compensation systems (Standard for Elevator Suspension, Compensation and Governor Systems, ASME A17.6-2010).

This new technology can be incorporated in the most iconic buildings. As part of a $550-million renovation in the 2010s, the Empire State Building’s original Otis elevators were modernized. The observation elevator was removed to facilitate the installation of a glass-walled elevator in a glass-walled hoistway to permit a wrap-around view of Manhattan, and a multimedia show is now part of every ride between the 86th and 102nd floor observatories. Flat, steel-reinforced belts replaced the conventional steel wire hoist ropes, thus allowing for lower-horsepower driving machines. The use of this new suspension technology was made possible by the ASME A17.1–2010 Code and A17.6–2010 Suspension Standard, both of which were adopted by New York City through the RS-18 Reference Standard adoption process.

Jim Coaker, P.E., is a consulting engineer in Fairfax Station, Va., and the immediate past chair of A17 Standards Committee. George W. Gibson, an ASME Fellow, is president of George W Gibson & Associates and was chairman of the A17 Mechanical Design Committee for 30 years. 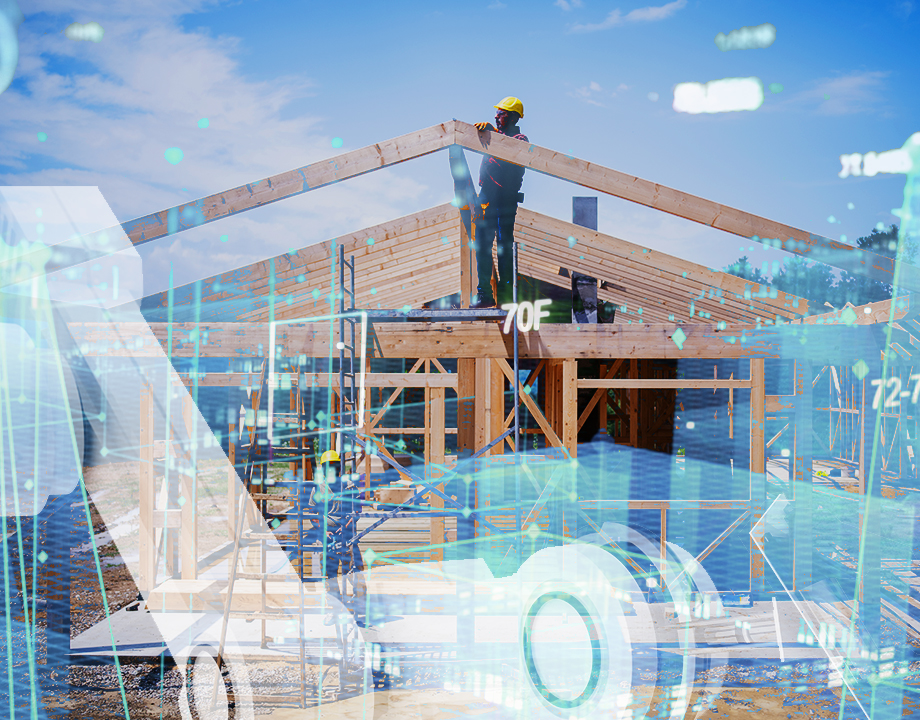