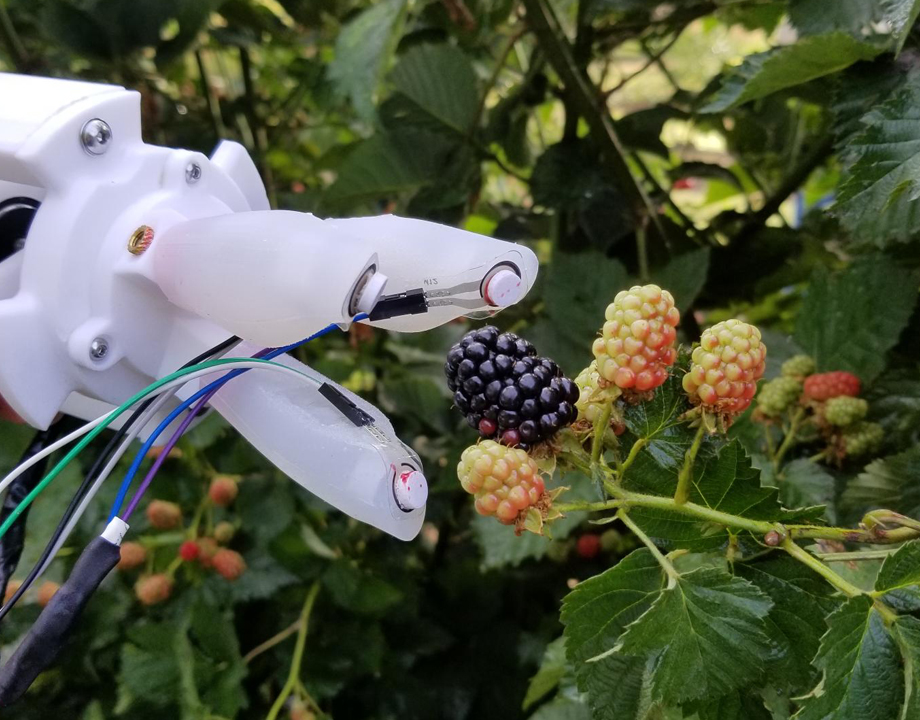 Podcast: Rosie and Other Household Robots

What the Home of the Future is Missing Today

No matter the type—blueberry, strawberry, raspberry—the berry is a soft and tender fruit. If you’ve ever gone berry picking you know to handle them very carefully so they don’t get squished.

Now imagine a berry-picking robot. The robot, as traditionally pictured might have grasping claws, but would smash the berries and miss most of the fruit.

But could a robot with a soft, gentle hand pick and pack perfect berries?

Yue Chen believes a soft robotic gripper may be the answer to many berry-harvesting issues farmers face. Chen is an assistant biomedical engineering professor at Georgia Tech. In May, he and his graduate-student team of Anthony Gunderman and Milad Azizkhani, along with a blackberry researcher at the University of Arkansas, debuted soft robotic gripper for the gentle harvesting of berries. 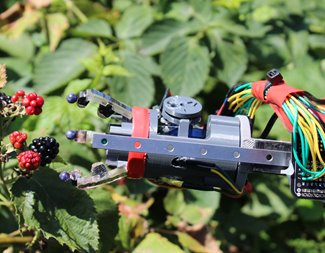 Ninety-five percent of berries picked with gripper were not crushed. Photo: Yue Chen
Blackberries, though they’re primarily harvested by hand today, are the berries most crushed during harvest, Chen said. Hand pickers can pinch the berries too hard and cause red drupelet reversion, in which the berries change color and break down when their cells are mechanically injured.

The injured berries can’t be sold, resulting in economic loss to farmers, said Renee Threlfall, a professor of agriculture and food science at the University of Arkansas. She helped develop the robotic gripper.

The robotic hand has only three fingers because the researchers quickly realized humans use only three fingers to pick berries. The gripper—unlike the human hand—is made from soft silicone. Its “fingers” are embedded with force sensors that tell the robot exactly the right force to use when picking the berry. It uses a unique tendon system that mirrors the human system for movement, Chen said.

Take Our Quiz: A Quick Look at Soft Robots

The trick was to ensure the gripper would not grip the berries too hard when harvesting and turn them to mush.

That’s where Threlfall came in. She worked with the team on a sensor glove that testers wore while picking berries. The sensors collected data about typical picking techniques, discovering the basic three-finger grip and pull, as well as the amount of force testers used when plucking the fruit.

The team used the force data when designing their gripper, which takes inspiration from the human hand.

“The human hand has tendons in the fingers that help you bend and move. So, we developed tendon wires, and when we pull the tendon wire, the gripper can bend,” Chen said. “That allows the three fingers to form a close grasp of the object.”

Field tests found the gripper caused minimal damage to the berries, keeping the berries intact 95 percent of the time. It took about 4.8 seconds for the gripper to pick a berry, Chen said.
The next step will be to make the gripper mobile, giving it the capability to move on its own through the fields.

But Chen is a biomedical engineer. He’s perfecting the gripper because he hopes one day it can be used in minimally invasive robot surgery. The gripping hand builds on the guided, tentacle-like robots he’s already developed for surgery.

The gentle and precise motions and gripping actions the robots use when berry picking can one day be used for precise robotic surgery, he said.

“I’m trying to develop a device that’s very dexterous,” he said. “Mathematically, taking berries from a plant is quite similar to removing a tumor from the body. You want to identify a target, perform the path planning, reach the target, remove the target very gently to avoid damaging the surrounding tissue.”

He has already developed or help to develop several medical devices that use tentacle-like rods that can be inserted within the body within a tiny incision that use a small camera to provide surgeons with continuous feedback. 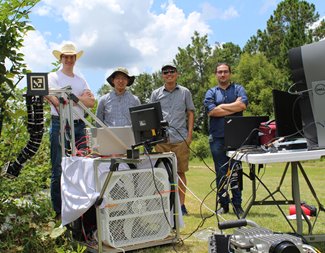 Team of Anthony Gunderman, Yue Chen, Ai-Ping Hu, and Milad Azizkhani developed gripper. Photo: Yue Chen
He gives the example of how one of the robots can clear an intracerebral brain hemorrhage (ICH), in which blood accumulates in the brain and compresses healthy tissue. ICHs are fairly common. One in 50 people will have one in their lifetime. The condition has a 40 percent mortality rate within 30 days.

Chen’s group developed an MRI-compatible concentric tube robot that can be operated in the MRI scanner so the surgeon, watching on a screen, knows how to guide the robot as it moves through the body. The tentacle-like robot is comprised of a group of elastic tubes nestled together. The surgeon can rotate them for an up-to 360-degree view of the space.

Today, ICH surgery is performed with a straight tube, which, due to its shape, returns a limited view.

More for You: The Strength and Versatility of Robotic Grippers

The tentacle robot had to be designed without any metal because it’s used for a patient while inside a magnetic resonance machine. MRIs take higher-quality images than traditional computed tomography (CT) scanners.

Surgeons can sit by the MRI machine and guide the tentacle-like robot while viewing the continuous images it sends back.

The tentacle robot, combined with a gripping robot, opens up surgical possibilities even further. “If we can add a gripper, it can grasp soft tissue or fiber, or to perform laser ablation,” Chen said.

While his robots still must gain FDA approval, he continues to redesign them and perfect their movements, believing one day it will be common for them to play a key role in savings lives.

Jean Thilmany is an engineering and technology writer in Saint Paul, Minn.

Podcast: Rosie and Other Household Robots

What the Home of the Future is Missing Today

When to Teach a Robot